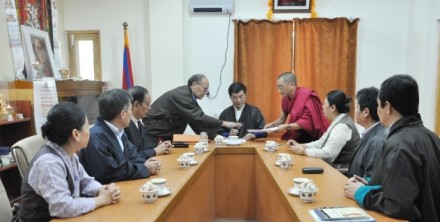 DHARAMSHALA: Kalon Tripa Dr Lobsang Sangay today ratified the recent amendments made to the Charter of Tibetans in Exile to change the official title of Kalon Tripa to Sikyong.

“The move to bring a motion on charter amendment to change the title of Kalon Tripa to Sikyong in the Parliament was discussed in the Kashag. The Parliament gave its unanimous approval to the charter amendment. We consider it as a historic transition and the need of the hour,” Kalon Ngodup Dongchung told Tibet TV after the ceremony.

The 15h Tibetan Parliament-in-Exile unanimously approved the charter amendment during its fourth session held from 14-22 September.  Kalon Ngodup Dongchung introduced the motion in the House and it was endorsed by Kalon Dolma Gyari.