Dharamsala, October 25 – More protests against the Chinese government’s education policy have been reported on Sunday as thousands of students took to the streets of Chentsa County to demand that the government revert its decision to replace Tibetan language as medium of instruction in Tibetan schools by Chinese language. 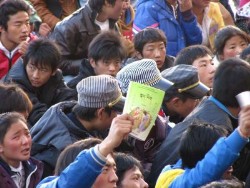 Sources say that teachers and school staff also joined the protest on Sunday that started around 7.30 in the morning yesterday. Students in Chentsa also protested on 19th and 21st October.

Meanwhile, similar protests have been reported from other areas as well. The first protests were reported from Rebkong on 19 October when Tibetan students from 6 different schools carried out protests demanding “Equality of People, Freedom of Language”.

Meanwhile, a letter of appeal signed by several teachers was submitted to the Qinghai government on October 15 urging the provincial government to reconsider its decision to change the medium of instruction from Tibetan to Chinese. Khabda.org, a Tibetan language blog says it has obtained a part of the letter submitted in both Tibetan and Chinese.