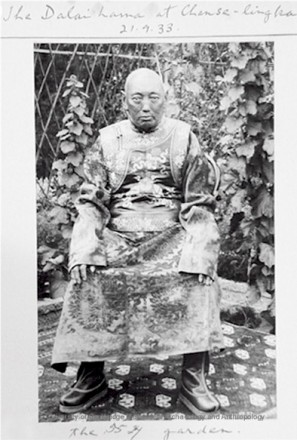 Dharamshala: The Central Tibetan Administration will organise a function on 25 February 2010 to commemorate the centenary of The Thirteenth Dalai Lama’s exile to India, the Kashag Secretariat said in an announcement Monday.

Kalon Tripa Prof Samdhong Rinpoche and the speaker of the Tibetan Parliament, Mr Penpa Tsering, will address the ceremony at Tsuglagkhang, the main Buddhist temple in Dharamsala. Later in the afternoon, Kalon Tripa will speak on the accomplishments of The Thirteenth Dalai Lama to an exclusive audience of officials of the Central Tibetan Administration.

The Thirteenth Dalai Lama was born in the year of the Fire Bird in 1876 at Thakpo Langdun in south Tibet to Kunga Rinchen and Lobsang Dolma, a peasant couple.

In 1878, he was recognized as the reincarnation of the Dalai Lama following predictions from the state oracles and auspicious signs at his birth. He was escorted to Lhasa where he was ordained into monkhood by the Panchen Lama, Tenpai Wangchuk, and was given the name Ngawang Lobsang Thupten Gyatso Jigdral Chokley Namgyal. In 1879, the Thirteenth Dalai Lama was enthroned at the Potala Palace.

On 8 August 1895, he assumed political power and was thrown into the thick of the Great Game played out by Czarist Russia and British India on the fringes of their sprawling empires. He went through the British invasion of Tibet in 1904 and the Chinese invasion of his country in 1909 and survived both experiences, with his authority enormously enhanced.

When the news spread in 1909 that Chao Er-feng, a Chinese General, was at the gate of Lhasa, the Dalai Lama and some of the most important officials fled Lhasa and headed to India. The group crossed Dromo and negotiated the Jelep-la pass, which separates Tibet from Sikkim.

In 1911, the Manchu Dynasty was overthrown and the Tibetans took this opportunity to expel the remnant Manchu forces from Tibet. The Dalai Lama returned to Tibet and went on to exercise a political authority not seen since the reign of the Fifth Dalai Lama. Besides attempting to modernise Tibet, the Dalai Lama also tried to eliminate some of the more oppressive features of the Tibetan monastic system. While in exile in India, the Dalai Lama was fascinated with the modern world and he introduced the first currencies and coins of Tibet. In 1913, he established the first post office in Tibet and he also sent four young Tibetans to England to study engineering. On 8 January 1913 he made the public statement of the five points of Tibetan Independence and he composed the present day Tibetan National Anthem.

In 1914, he strengthened the Tibetan military force by organising special training for the Tibetan army. In 1916, he selected several young and intelligent monks from various monasteries to preserve the unique Tibetan medical tradition and he established the Tibetan Medical Institute which is well know today as Men-Tse Khang. In 1923, he established a police headquarters in Lhasa for the security and welfare of the Tibetan people and in the same year, he also established the first English school in Gyaltse. He died in 1933 at the age of fifty-eight.