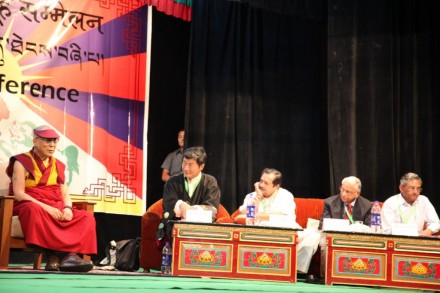 His Holiness the Dalai Lama addressing the opening session of the 4th All India Tibet Support Groups Conference at TIPA in Dharamsala on 9 June 2012
DHARAMSHALA: His Holiness the Dalai Lama today inaugurated the 4th All Tibetan Support Groups Conference in Dharamsala, calling on Indians to support the preservation of Tibetan culture and natural environment for the wider interest of entire Asia.

The three-day conference, being attended by over 150 Indian supporters from across India, is convened by the Core Group for Tibetan Cause, India. It is facilitated by the New Delhi-based India Tibet Coordination Office in collaboration with the Department of Information & International Relations of the Central Tibetan Administration.

Addressing the conference, His Holiness the Dalai Lama expressed concern over the destruction of natural environment, exploitation of mineral resources, and threat to wildlife animals on the Tibetan plateau. He made a clarion call for the preservation of Tibetan culture and natural environment, which he said are vital for the well-being of the whole world, particularly China and India in Asia.

“Millions of Chinese who have lost morality and way of life, Tibetan Buddhist culture of peace and compassion, can help them immensely. The preservation of Tibetan culture is not only concerned with 6 million Tibetans, but it is in the larger interest of Central Asia, including China,” His Holiness said.

He said rivers originating from Tibet, the roof of the world, such as Brahmaputra are lifeline for people living in many Asian countries, including India. “So the Indians certainly have rights to raise their concerns on the preservation of Tibet’s environment. The preservation of Tibetan culture and ecology are non-political issues, it is easier for the concerned people, including religious leaders to work and raise people’s interest for the cause,” he added.

His Holiness spoke on length about Tibet’s strong spiritual bond with India and how Tibetan script and Buddhism originated from it. “Though Tibetans inside Tibet are physically controlled by communist China, but mentally more than 99 per cent of them always look here (India). The actual situation for the last 60 years have clearly shown our hope lies here,” he said.

Calling himself as the messenger of ancient Indian thoughts, His Holiness said he is focussing his efforts towards promoting human values and religious harmony. He said India is a living example of secular ethics and non-violence, which are relevant to the whole world.

Conveying his best wishes to the Indian supporters a fruitful three-day conference, His Holiness emphasised the need for putting into action the ideas and knowledge shared among the participants.

In his keynote address, Kalon Tripa Dr Lobsang Sangay said India is a durable and reliable friend and supporter of the Tibetan people. “Over the last more than 50 years, the Indian people have stood for justice and freedom of Tibetans,” Kalon Tripa said.

Kalon Tripa drew the attention of Indian supporters to the prevailing grim and tragic situation in Tibet. “39 Tibetans have drank petrol and set their bodies on fire. These acts have demonstrated that occupation of Tibet is unacceptable and repression is unbearable,” he said.

Kalon Tripa appealed for continued support from India, emphasising that it can play very important role towards finding a lasting solution to the issue of Tibet.

Addressing the gathering, Chandresh Kumari, a member of Indian Parliament, said Kalon Tripa should garner support from the important world politicians to encourage the Chinese government to resolve the issue of Tibet through negotiations.

On the first day of the conference, there will be five plenary sessions, where eminent panelists will deliberate on a wide-range of issues such as present situation on Tibet, Tibet and Sino-Indian Relations, Tibet’s fragile eco-system and its impact on the neighbouring countries, and the review of activities of Tibet support groups and their impact. The panelists include Ms Dicki Chhoyang, Kalon for the Department of Information & International Relations of the Central Tibetan Administration and Mr Lalit Mansingh, former Foreign Secretary of India.

The highlight of the second day will be a working group discussions, where participants will deliberate on ways to strengthen Tibet Support Groups in India, raise the awareness on the Tibetan issue among Indian youths in schools, colleges and universities, and discuss India’s policy on Tibet.

On the third day of the conference, the participants will adopt a Declaration and an Action Plan. There will also be a group discussion between the participants and the Tibetan Settlement Officers. It will be followed by a press conference.

On the closing ceremony, there will be addresses by Chief Guest Mr Bashisht Narain Singh, Member of Parliament, Rajya Sabha, and Mr Penpa Tsering, the Speaker of the Tibetan Parliament in Exile.

The first All India Tibet Support Groups Conference was held in Chandigarh in 2003, followed the by second in Bodhgaya in 2006 and the third in Delhi in 2009.