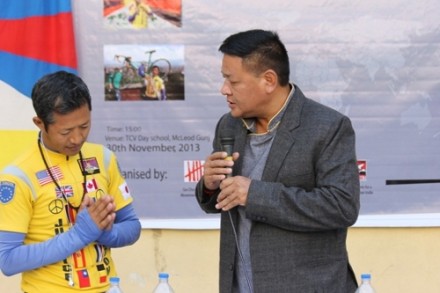 DHARAMSHALA: Dharamsala welcomed on Saturday a Tibetan who reached the town after cycling through Europe and Asia on a campaign to seek global support to end China’s repressive rule in Tibet.

Hundreds of Tibetans and well-wishers lined the streets to welcome Rinpo Yak, who cycled through 400 cities in 15 countries across Asia and Europe.

Rinpo Yak embarked on this cycling rally from Brussels on 10 March 2013. Since then, he travelled through various European and Asia countries, including Belgium, Germany, France, UK, Japan, Taiwan, Hong Kong, Nepal and India. He met Parliamentarians, Tibet supporters and human rights activists during the journey and explained them about the plight of Tibetans under the repressive policies of the Chinese government in Tibet.

Addressing the welcome event in Dharamsala, Mr Penpa Tsering, Speaker of Tibetan Parliament-in-Exile, applauded the efforts of the cyclist to raise awareness about China’s atrocities in Tibet. He urged Tibetans to draw inspiration from his initiative and determination to do something for the Tibetan cause.

The speaker also highlighted the contributions of other Tibetan individuals who have carried out similar campaigns for the Tibetan cause. He stressed that Tibetan unity is the most important factor that will determine the success of the Tibetan movement.

Rinpo, in his brief speech, spoke about his objectives for embarking on the international cycling rally from Europe to Asia. He said the dire situation prevailing inside Tibet needs to be brought to the attention of the world’s conscience.

Rinpo Yak is based in Minneapolis, US. He has been actively engaged in political activities since 2000. He had organised and participated in peace marches, prostration events, and cycle rallies throughout almost all the states in the US.