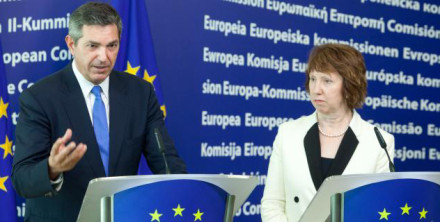 DHARAMSHALA: The EU Special Representative for Human Rights, Mr Stavros Lambrinidis, who went to Tibet during an official visit to China from 9-18 September, noted worrying trends in key areas of human rights concern.

The EU Special Representative for Human Rights was taken to see herdsmen in an agricultural cooperative and a newly built village for resettled nomads in Tibetan areas in Qinghai. He met with professors and students at Tibet University and editors of the Tibet Daily, and visited the Potala Palace and Jokhang and Sera Monasteries in Lhasa, where he met with monks and members of Monastery Management Committees.

He held talks with several party and government officials, including the Party Secretary of TAR and the Vice-Governor of Qinghai. Issues discussed included security, stability and due process of law, including in the context of self-immolations; the free exercise of religion and expression; sustainable development challenges and urbanization; the livelihood of ex-nomads; the protection of the environment; and the preservation of cultural identity and heritage, including through bilingual education.

In Beijing, Mr Lambrinidis held high-level meeting with various leaders, including Chinese Vice-Minister for Foreign Affairs. The two sides discussed China’s commitments under the UN’s Universal Periodic Review, including on early ratification of the International Covenant on Civil and Political Rights and the human rights situation in minority areas, including Tibet and Xinjiang. They also deliberated on latest restrictions on the freedoms of expression, information, and association; freedom of religion and belief; death penalty reform; progress on economic and social rights; the universality of human rights and the role of civil society and protection against arbitrary harassment, arrests, and detentions.

Mr Lambrinidis also chaired the first ever EU-China Roundtable on Business and Human Rights in Beijing. The meeting gathered over 50 participants from EU and Chinese authorities, business, academia and other stakeholders, to discuss the implementation of the UN’s Strategic Framework and Guiding Principles on Business and Human Rights, exchange best practices, and explore possible future cooperation between China and the EU in this field.

“The visit provided opportunities for the EU and China to engage in in-depth discussions on human rights at a senior level, on the basis of serious concerns. The two sides also discussed ways of promoting enhanced dialogue and results-oriented cooperation on human rights,” Mr Lambrinidis said in a press release on Friday (20 September). (View press release)

“During my visit the Chinese authorities allowed for meetings and open discussions with a broad range of stakeholders. I had the opportunity to be informed of progress on a number of important economic and social fronts, including poverty eradication and education,” he said.

“At the same time, I noted worrying trends in key areas of human rights concern, including the heightened monitoring and restrictions placed on freedom of expression on- and off-line, as well as the persecution, arrest, and detention of people for peacefully expressing their views or legally exercising their professional duties,” he said.

“Throughout my visit, I underlined the EU’s readiness to continue to work with China in promoting respective adherence to international human rights obligations and standards,’’ he added.