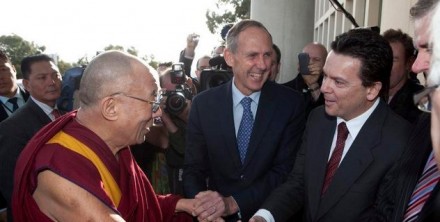 dalai-lama-bob-brown-nick-xenophon-2011-6-13-23-30-11
DHARAMSHALA: Dr Bob Brown has said he would continue to work for the Tibetan cause till the end of his life even after he resigned as the leader of the Australian Greens and Senator.

His Holiness the Dalai Lama’s Representative in Australia, Mr Sonam Norbu Dagpo and Secretary for International Relations of the Central Tibetan Administration, Tenzin Phuntsok Atisha, recently made a courtesy call to Dr Brown when he resigned from the Senate.

The Office of Tibet in Australia said in a statement: “Dr Bob Brown has always listened with deep interest and concern to our detail briefings in the Parliament on the critical situation in Tibet. He worked as a long-time co-chair of the Australian Parliamentary Group for Tibet, and he has used his good office to raise the issue of Tibet by presenting motions in the Parliament on various occasions.

“Dr Brown had visited Dharamsala to learn in detail about the issue of Tibet. He also went to Tibet in 2000 to see and understand the real situation on the ground, and continued to support the Tibetan issue.

“He used to join Tibetans whenever they carry our peaceful campaigns in Canberra, and he continues to do so. Moreover, he would personally meet His Holiness the Dalai Lama when he visits Australia.

“Though he resigned as leader of the Greens and Senate, Dr Bob Brown said he would continue to carry out campaigns in support of the Tibetan people’s rights for the rest of his life.

“Dr Brown personally visited Kalon Tripa Dr Lobsang Sangay at his hotel room during his recent to Melbourne, and they jointly addressed a press conference.

“Ms Christine Milne, who succeeded Dr Bob Brown as the leader of the Australian Greens, also plegded to support the issue of Tibet same as ever before,” the Office of Tibet said.