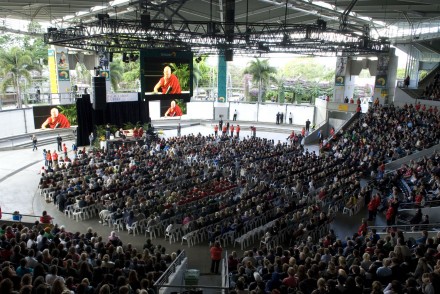 Thousands listen to His Holiness the Dalai lama's public talk on the spirit of never giving up in Brisbane,
BRISBANE: His Holiness reached Brisbane this morning to begin the Queensland leg of his Australia tour. Upon landing, he gave his blessing to Shevaune Conry, a local woman with Multiple Sclerosis who inspired the creation of Youngcare, an organisation looking after young people in aged and nursing homes.
His Holiness began his day with media interviews and later met with members of Tibetan, Mongolian and Bhutanese communities at his hotel in the city. His message that “China controls our country, but not our minds and while we live in exile, it is our duty to tell the world about Tibet” left the small Tibetan community with a strong sense of responsibility. Addressing the members of all three communities, His Holiness stressed on the importance of promoting the Buddhist culture of love and compassion.
In the afternoon, His Holiness gave a public talk on the spirit of never giving up, a topic of immense value and relevance to the Queensland community devastated by massive floods earlier in the year. The event was organised by local charity organisation Karuna House. It drew a diverse crowd of over 2,000 people, including many youngsters. As His Holiness arrived at the open-air venue, everyone rose on their feet. The crowd was deeply moved by His Holiness who blessed a number of disabled people standing to greet him near the stage. His Holiness said that the Queenslanders have shown the true spirit of a community helping each other, when hit by one of Australia’s worst natural disasters in recent times. He quickly added this goodwill and generosity should transcend our geographical borders.
His Holiness was delighted to know that a large number of students from high schools and universities are part of the public forum. He said, “We saw a lot of bloodshed in the past century. The youth now have a large role to play in creating the 21st century one of peace. However, peace is not just freedom from violence. Peace encompasses love and compassion.” The universality of His Holiness’ message resonates with all levels of Australian society. After listening to His Holiness’ talk, Jane Roach, a teacher and a Brisbane local, said, “I am not a Buddhist, but the Dalai Lama is a messenger of hope and optimism.” 14 year-old Adam Brown thinks, “the Dalai Lama is cool”. State health minister Geoff Wilson welcomed His Holiness to the event and gave his note of appreciation for speaking to the people of Brisbane.
His Holiness will be in Queensland for the next two days. He will spend tomorrow at Chenrezig Institute in the Sunshine Coast.
–Report filed by Tsering Kyinzom