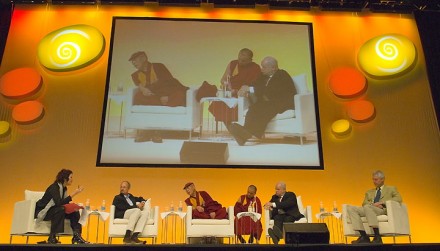 His Holiness the Dalai Lama (3rd from left) at the Mind and its Potential conference in Sydney, Australia, on 3 Dec. 2009/Photographs courtesy of Rusty Stewart

Sydney: His Holiness the Dalai Lama on Thursday joined three of the world’s foremost psychologists and neuroscientists for a forum on “Science of Mind” at Sydney’s Mind and its Potential Conference.

Over the course of two and a half hours the four covered a broad range of topics in Buddhist science and modern psychology, discussing issues as diverse as depression, positive psychology and the evolutionary basis of emotions.

On the subject of depression, His Holiness noted that in Tibetan language there is no term corresponding exactly to our term depression. Rather, he explained, there is recognition of many different states, each owing to particular circumstances, causes and conditions and that particular “depressions” must treated in accordance with their specific causes.

Dr. Martin Seligman presented to His Holiness his latest findings in the field of positive psychology, which he characterised as being concerned not with the mere prevention of suffering but conversely the promotion of “human flourishing”: positive emotions, purpose, positive relationships and positive accomplishment.

Marc Hauser, Harvard Professor of Evolutionary Biology, presented to His Holiness some challenging findings relating to the possibility that we are genetically predisposed towards certain behaviour patterns. Hauser’s presentation led to a fruitful dialogue on the scope to which we can overcome biological and genetic determinants on our behaviour through training the mind.

Finally, B. Alan Wallace, an experienced Buddhist practitioner and fluent Tibetan speaker, presented an account of Seligman’s positive psychology through the lens of classical Buddhist science.

His Holiness, who for over a decade has inspired and encouraged collaboration between Buddhist scholars and cognitive scientists, was impressed by the observations by Seligman, Hauser and Wallace, offered further profound insights relating to their work and strongly encouraged the continuation of cross-cultural research into the nature of mind. 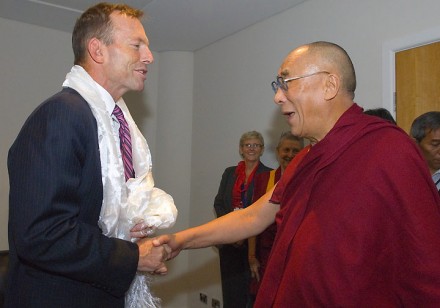 In the afternoon His Holiness gave the first of four public talks scheduled for his eleven-day visit to Australia and New Zealand. Around 7,000 attended the talk on the theme of “Our Future: Who is Responsible?”

His Holiness was introduced by Kylie Kwong – a Chinese Australian and prominent television chef, author and restaurateur. During an hour and a half’s talk His Holiness spoke about responsibility, compassion, training the mind, inner peace as a precursor to a happy and meaningful life, and many other topics. At the conclusion of the talk His Holiness answered questions on matters including coping with bereavement, how to explain Buddhist concepts such as karma within a western scientific framework, and what Australians can do to aid the plight of Tibetans in Tibet. On the latter question His Holiness encouraged people to try and travel to Tibet to see for themselves the situation facing the Tibetan people and to share their findings with the wider world.

In his last appointment in Sydney His Holiness met with Tony Abbott, the newly installed leader of the Liberal Party and leader of the opposition in the Australian Government.

In their joint press conference His Holiness and Mr. Abbott reported having discussed mostly spiritual matters, with Mr. Abbott thanking His Holiness for sharing valuable advice on coping with the demands of a busy and stressful life. His Holiness said he was very happy for the opportunity to meet the opposition leader and reiterated his belief in the value of democratic government.

Addressing the media His Holiness thanked the Australian Government for accepting annually a number of Tibetan refugees into Australia, noting that this had been tremendously important to the Tibetan exile community. Mr. Abbott said he believed that Australia should continue to accept refugees from Tibet.

Asked if he was concerned about climate change scepticism within the opposition party, His Holiness said that it is democracy itself that is of paramount importance and that it is only normal in a healthy democracy to have a diversity of views.

Asked if he would be encouraging the Prime Minister to take the opportunity to meet His Holiness over the coming week, Mr. Abbott conceded that there certain things that it is easier to do while in opposition and that Mr. Rudd must balance many competing considerations. Nonetheless, Mr. Abbott said he understood Australians’ disappointment over Kevin Rudd’s decision not to meet His Holiness during this visit, noting that former Prime Minister John Howard had found the time to do so.

Today marks the conclusion of His Holiness’s visit to Sydney. He will leave tomorrow morning for Auckland and remain three days in New Zealand before returning to Australia to visit Melbourne and Hobart. In New Zealand His Holiness will give another teaching on Nargajuna’s commentary of Bodhicitta, give a public talk, meet with members of New Zealand’s Tibetan community and meet with the Maori, the indigenous Polynesian people of New Zealand (Aotearoa).