DHARAMSHALA: His Holiness the Dalai Lama graced the opening ceremony of the 20th Shoton festival, which began today at the Tibetan Institute of Performing Arts (TIPA), based near Mcleod Ganj. The Shoton (Yoghurt) festival celebrates the unique Tibetan artistic heritage of opera or Ache Lhamo. 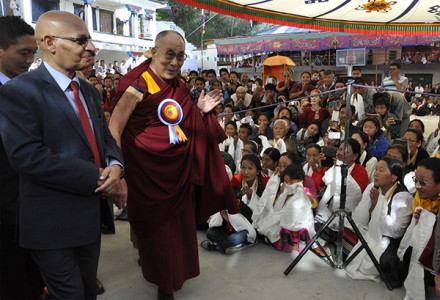 Besides His Holiness, other dignitaries at the inaugural ceremony include Sikyong Dr. Lobsang Sangay, members of the Kashag, Speaker Penpa Tsering, Tibetan Parliamentarians, Tibetan justice commissioners, and secretaries of the various departments of the Central Tibetan Administration.

Over 4000 people including Tibetans and foreign opera aficionados gathered at the courtyard of TIPA to witness the annual festival.

The festival began with a minute’s silence in memory of all those Tibetans who have sacrificed their lives for the cause of Tibet, and those still suffering brutal repression under the Chinese government in Tibet.

Mr. Wangdue Tsering, Director of the Tibetan Institute of Performing Arts, gave the welcome address and read out the annual report of the institute, explaining the efforts made by TIPA in the preservation and promotion of Tibet’s unique and ancient tradition of performing arts.

Following the Director’s address, the idol of Mahasidha Yogi Thang Thong Gyalpo, the founder of Tibetan traditional opera was brought to the stage. The participating opera associations then presented an extract of their respective plays before the public and His Holiness the Dalai Lama.

The festival is funded by The Dalai Lama Trust and Prince Claus Fund for Culture and Development based in The Netherlands.

Tibetan Opera known as Ache Lhamo in Tibetan is the most popular form of theater in Tibet. The core stories of these theatrical plays are drawn mostly from ancient Indian Buddhist folk tales, life of important personalities, and historical events from the Tibetan civilization.

Little is known about the development of opera in ancient Tibet until the time of His Holiness the great Fifth Dalai Lama, who was a great opera aficionado himself. However, by the turn of the 19th century, Lhamo has become an intrinsic part of traditional Tibetan lives with Lhamo troupes and performances common in all parts of Tibet. 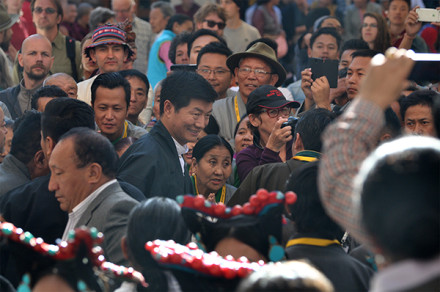 With rich stories, colorful masks and simple dialogue interspersed with comedy and satire; Tibetan people have for centuries took great pleasure in attending these performances. These performances were also a great source of comic relief for the public in ancient Tibet as Lhamo artists were notorious for incorporating extemporized satire based on topical issues like taxation and quirky Tibetan superstitions.

However, Tibetan traditional art and culture faced a severe blow in the aftermath of the Chinese occupation of Tibet in 1959. These days in Tibet, the opera traditions have been reduced to a mere marketing tool to boost tourism and galvanise its propaganda on Tibet by the Chinese government.

In contrast, the tradition of Tibetan opera began to revive in exile and grew rapidly in its quality as well as scale under the guidance of His Holiness the Dalai Lama and with the establishment of the Tibetan Institute of Performing Arts. Opera associations began mushrooming in Tibetan settlements in India and Nepal, and modest opera festivals were held locally in the respective settlements. Taking things a step further, the first grand opera festival was held in 1993 with the participation of four Tibetan settlements. Since then, the festival was held every year in various settlements with increasing participation and audience.