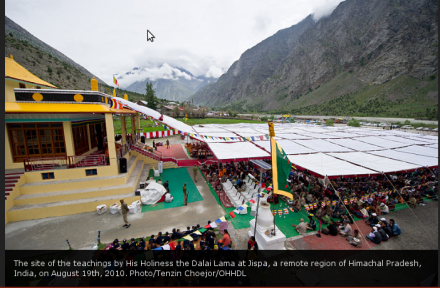 The first edition of “The Bhoti” was published on 18 August. The newspaper aims to keep readers in the Himalayan regions of Spiti, Kinnaur, Dholpo, Ladakh, Tawang, Sikkim, Nepal and Bhutan, informed about their language, religion and culture. Readers can learn about monasteries and antiquities, handicrafts, landscapes and produces of the Himalayan region. Other interesting features of the paper are informations on visits of His Holiness the Dalai Lama, religious festivals, epic stories, astrology, health and performing arts.

Expressing his appreciation of a Tibetan language newspaper, His Holiness said it would help in the education of the local people and give fillip to their interest to read and learn Tibetan language. The paper could be more interesting medium of learning Tibetan for those who might be bored in reading scriptures.  Besides, they could learn many things from the newspaper, His Holiness said.
His Holiness emphasised that the newspaper should not give bias reports. Instead of giving a one-sided view, it is of paramount importance to report after looking into the whole issue.

His Holiness said instead of posting daily news reports, efforts should be made to educate the public through the paper. He said the paper should write correct reports on matters of malpractices by politicians, religious figures and businessmen in the society.

His Holiness said he always to use to tell journalists to have long nose like that of an elephant, to be able to smell both what is in front and the back to give clear information to the general public. It is very important to first understand the issues properly to educate the public in discerning right from wrong.

His Holiness also released the memoir of Dr Chagri Tashi Tsering, who was born in Jispa and learned traditional Tibetan medicine in Tibet.

Following the book release, His Holiness gave teachings at Druk Choekhor Monastery to over 4,000 Buddhist devotees, which include people from Russia, Italy, Vietnam, Korea and China.