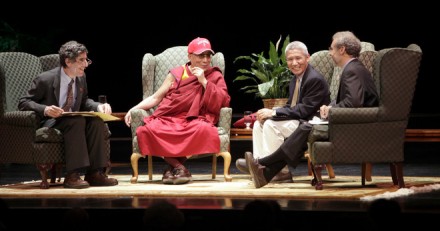 Madison: His Holiness participated in a dialogue with Dr. Richard Davidson on Investigating Healthy Minds went at the Capitol Theatre of the Overture Center for the Arts in Madison on Sunday. Daniel Goleman, author of “Emotional Intelligence” and “Ecological Intelligence” moderated the dialogue.

Wisconsin Governor Jim Doyle made an introductory remark referring to His Holiness the Dalai Lama as a “friend of Wisconsin.” He then spoke about the new research initiative of Dr. Davidson through the Center for Investigating Healthy Minds in the University of Wisconsin in Madison.

“The new Center for Investigating Healthy Minds is another shining example of how research based here in Madison can change the world,” Governor Doyle said.

The Governor said this fall schools in Madison will teach mental exercises under the Center’s initiative to fifth graders to promote qualities like attention, relaxation and empathy. Similarly, the Center plans to work with veterans returning from the wars inmates who are preparing to leave prison to help them readjust to society.

“It is groundbreaking research on how transforming the mind can change the brain and body and improve the quality of life for everyone,” the Governor said.

The Governor then presented the Madison Youth Choir, which performed some songs as His Holiness, Governor Doyle, Dr. Davidson and Goleman, sat at the side of the stage. Following the performance two members of the choir presented a red Wisconsin Badgers (name of the baseball team) hat to His Holiness, which he wore immediately on his head to the joy of the audience.

His Holiness and Dr. Davidson discussed contemplative neuroscience, a new discipline that explores the intersection of Western science and Eastern contemplative traditions. They responded to questions by Mr. Goleman concerning relationship between happiness and physical health. His Holiness explained from a Buddhist science and philosophical perspective why inner peace had an impact on external attitude and physical condition. Similarly, Dr. Davidson said it has been well established that there is relationship between the two.

His Holiness said that a self-centered attitude is associated with an unhealthy mind. A focus on others is at the heart of compassion, he added. He advised people to be a “wise selfish” rather than a foolish one. His Holiness said that people get more benefit from taking care of other people than merely thinking of themselves.

Complementing this view, Dr. Davidson described a study with two sets of college students where members of one group were given $50 to spend on themselves and come back and report how happy it made them while members of another group was given $50 to spend on gifts for other people. He said the study found that those who used the money to buy gifts for others were happier than those who bought things for themselves.

His Holiness then returned to the Deer Park Buddhist Centre. His Holiness departs Madison on 17 May 2010 for Cedar Falls in Iowa for his next leg of the programme.

This is the eighth time His Holiness has visited the Madison area since 1979.