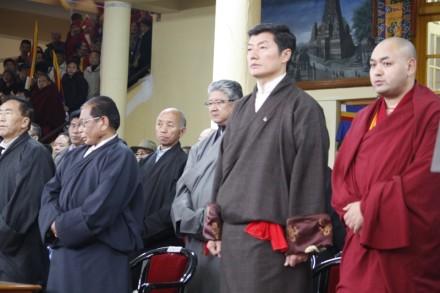 DHARAMSHALA: Tibetans and supporters across the world organised rallies and prayer services to commemorate the 54th anniversary of Tibetan people’s protest against the Chinese invasion and occupation of Tibet on 10 March.

Addressing a massive gathering in Dharamsala, Sikyong Dr Lobsang Sangay paid tribute to all those Tibetans who have sacrificed their lives for Tibet. “The yearning for freedom that moved our elders to undertake the epochal events on 10 March 1959 is a beacon that guides our present-day struggle to secure our basic freedom, dignity and identity,” he said.

Sikyong said China’s continued occupation and repression in Tibet are the primary conditions driving Tibetans to self-immolation. He said Tibetans deeply resent China’s constant assault on their Buddhist civilization, identity and dignity, demonization of His Holiness the Dalai Lama, influx of Chinese settlers into Tibet, forced removal of nomads from the grasslands to permanent ghettos and plundering of natural resources.

Sikyong reaffirm the call to the international community to press the Chinese government to allow the UN High Commissioner for Human Rights entry into Tibet, and also to give access to diplomats and the international media. “Only in this way can the truth about the grave situation in Tibet be unveiled and the self-immolations abated,” he added.

Sikyong made a fresh appeal to the new Chinese leadership to view the Middle-Way Approach proposed by the Tibetan side to a pragmatic political approach and a win-win solution to the issue of Tibet. (View full statement) 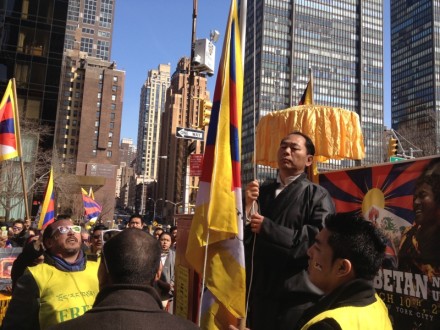 In New York, Representative Lobsang Nyandak read out Sikyong Dr Lobsang Sangay’s statement at a gathering of tens of thousands of Tibetans in front of the UN Headquarters. He said the international community must support the determination and legitimate aspirations of the Tibetan people.He also urged Tibetans to remain vigilant about those people in our community who bring defame His Holiness the Dalai Lama and the Central Tibetan Administration through their irresponsible acts.

Meanwhile, Kalon Ngodup Dongchung who is currently on tour to East coast of the United States, paid tribute to all those Tibetans who have sacrificed their lives for Tibet.

He said that the uprising day anniversary evokes a mixed happy and sad feelings and a proud moment for Tibetan people. He emphasised that Tibetans must be proud of their remarkable commitment to the non-violent approach in their freedom struggle under the guidance of His Holiness the Dalai Lama. He also explained about the nature and evolution of the Middle-Way policy towards resolving the issue of Tibet. After his visit to the Tibetan community in Minnesota on 9 March, Kalon Ngodup Dongchung will visit Washington DC, New York, Boston and Connecticut. Other speakers at the event include Lhadon Tethong, director of Tibetan Action Institute, Prof. Yang Jianli, president of Initiatives for China and Dhondup Lhadar, vice president of Tibetan Youth Congress. 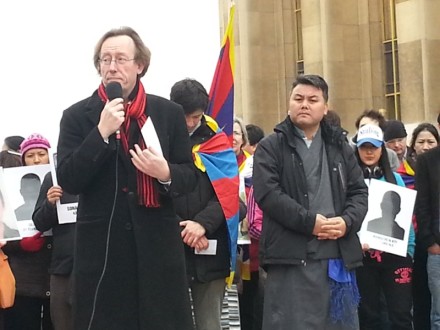 Hundreds of Tibetans and their French supporters together marked the 54th anniversary of the Tibetan National Uprising Day in Paris.The event, which was organised by the Students for a Free Tibet, France, saw representatives from Chinese, Japanese and Taiwanese communities taking part in the protest rally to support the Tibetan cause.A ceremony was held at the Place de Trocadero, where homage was paid to all those Tibetans who have sacrificed their lives for Tibet, including the 107 self-immolators.Mr Tsering Dhondup, Secretary Bureau du Tibet, Paris read out the statement of Sikyong Dr. Lobsang Sangay. Its French translation was read by a Tibetan youth.

Mr Jean Patrcik Gilles, a member of the French National Assembly and a co-president of the Tibetan Group in the assembly, also addressed the gathering.

While reiterating his support for the just cause of Tibet, Deputy Jean Patrick Gilles underlined the importance of dialogue for a durable solution of the Tibetan issue and informed the gathering that the Tibet Group would be meeting the French President Mr. Francois Hollande before the President’s scheduled visit to China to urge him to press on the Chinese leadership to enter into constructive dialogue with the Tibetan leadership.

A protest march was held in front of the Chinese embassy. The protesters called for resumption of the Sino-Tibetan dialogue process, and unfettered access to international media and diplomats to assess the ground situation inside Tibet. The Chinese government was urged to respect the fundamental human rights of the Tibetan people. 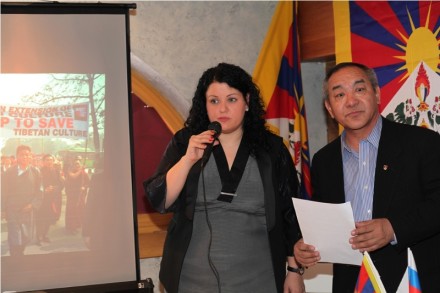 The commemoration of the 54th anniversary of the Tibetan National Uprising on March 10, 1959 in Lhasa, the capital of Tibet, against  China’s invasion and occupation of Tibet was observed in Russian Federation by supporters & friends of Tibet, Buddhists and Tibetans.

In the capital of Russia, Moscow, the commemoration of the national event began with prayer service, chanting  ”the Prayer of Truth”, composed by His Holiness the 14th Dalai Lama on 29th September 1960, and paying the homage to all those Tibetans who have sacrificed their lives for Tibet. The introductory speech on the tragic situation in Tibet by Mrs Nadya Berkengeym, Vice-President of Moscow-based Tibet House, was followed by the speech of Nawang Rabgyal, Representative of His Holiness the Dalai Lama to Russia and Commonwealth of Independent States. Representative Rabgyal spoke on the main causes of the uprising in occupied-Tibet and the nature of  the Tibetan struggle for freedom. Thereafter, the official statement of Sikyong Dr Lobsang Sangay on the 54th anniversary of the Tibetan National Uprising Day was read out in Russian, which was distributed to the media.

It was followed by screening two documentary films produced by CTA and dubbed in Russian:  ”What’s China doing in Tibet ?”  and  ”The Burning Question – Why are Tibetans Turning to Self-immolation?”. After the film show, the several  questions and comments from the audience were  answered by Representative Rabgyal and Mrs. Nadya. The photo exhibition on Tibet and Tibetans before 1959 was organised at White Cloud Culture Center in Moscow. The commemoration event in Moscow was organized by Tibet House. (News report and photos available in site:  www.tibethouse.ru )

A prayer for Tibetans suffering in Tibet was also organised afternoon at Open World Center in Moscow by a group of Buddhists, led by Gaden Tendar Ling Center of  FPMT. The picket (vigil)  was organised in the evening at the center of Moscow, near Russian President Administration Office, by a group of Russian human right activists carrying posters:  ”Tibet is Burning” and “Down with China’s policy in Tibet”. The picket  was led by Mr Valery. Nikolski, journalist and member of Moscow Chapter of Helsinki Human Rights.

In Kalmyk Republic, the Friends of Tibet Society, Tibetans and Buddhists observed the 10th March anniversary. In the morning the  prayer service for the Tibetans suffering under China’s mis-rule was organized at Kalmyk Buddhist Temple. In the evening at 4.00 PM the mass meeting was held at center square of Elista, capital of Kalmyk Republic, carrying the photos of 107 Tibetans who have self-immolated.The Chairwoman of Friends of Tibet Society (FTS), Mrs. Antonina Kookueva, spoke on the current situation in Tibet and read out the official statement of Sikyong Dr. Lobsang Sangay. The FTS began the signature campaign for Solidarity with Tibetans. ( News and photo in www.buddhismkalmykia.ru )

The 54th anniversary of Tibetan Uprising was also observed in Tuva Republic in north-east Siberia of Russia. It was organised by Friends of Tibet Society in Tuva. Mrs. Ailana Balgan, President of Friends of Tibet Society, spoke on the prevailing situation in Tibet and read the official statement of Sikyong, the democratically elected political leader of Tibetans. Prayer services were held in Buryat Republic, where there are Tibetans and Buddhist centers. The detailed news reports and photos of the 10th March commemoration in Russian Federation are available in the  website: www.savetibet.ru 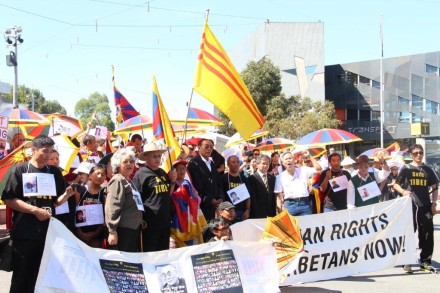 Religion and Culture Kalon Pema Chhinjor presided over the commemoration of 54th Tibetan National Uprising Day in Australia on 10 March.

The function began with a minute’s silence and prayer service in memory of all those Tibetans who have sacrificed their lives for Tibet.

In his address, Kalon Pema Chhinjor said Tibetans living in the free world and Tibet supporters must redouble their efforts to let the world aware of the cries of Tibetans inside Tibet.

He spoke about the efforts made by the Central Tibetan Administration to seek genuine autonomy for Tibet, adding that the Chinese leadership must consider this reasonable demand. He said the issue of Tibet will not going to disappear.

Members of the Chinese-Tibetan Friendship Association, Tibet Support Groups, Vietnamese and Nagaland communities joined hundreds of Tibetans to mark the epochal moment in Melbourne. In his address, Mr Tsering Samdup, president of the local Tibetan association, urged the international community, including the UN and peace loving people, to stand up for the Tibetan self-immolators’ genuine aspirations for freedom and His Holiness the Dalai Lama’s return to Tibet.

In their speeches, the Tibetan supporters said the peace and freedom loving nations and people must persuade the Chinese government to find a lasting solution to the Tibet problem through dialogue. 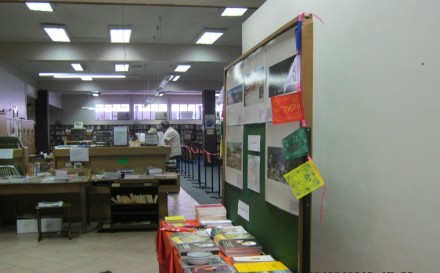 The Office of Tibet organised a photo exhibition on Tibet at the Littleton Community Library on 9 March to commemorate the 54th National Uprising Day.

Along with photos there are some books on Tibet, Zulu and Tshwane translations of ‘A Human Approach to World Peace’, ‘Compassion and Individual’, ‘the Global Community and the need for Universal Responsibility’ by His Holiness the Dalai Lama. Sikyong Dr Lobsang Sangay’s 10th March Statement, leaflet on self-immolations in Tibet and Middle Way Policy were put on display and distribution. The photo exhibition will remain for two weeks.

Mrs Heldigard, a practicing Buddhist lady, who assisted us organising the exhibition, went along with Tenzin Kunsang of the Office of Tibet to some other libraries in Pretoria on that day and displayed leaflets on Tibet.

On 10 March, a special prayer service for all those Tibetans who have sacrificed their lives for Tibet at Lamrim Buddhist Centre in Johannesburg.

His Holiness the Dalai Lama’s Representative Migyur Dorjee gave a talk on the significance of the day and on the primary causes of the wave of self-immolations in Tibet. Sikyong’s statement was handed over to every member present on the occasion. 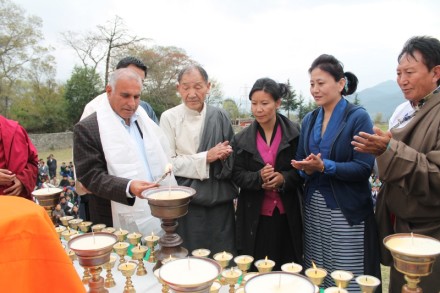 Indian dignitaries, including Mr Gulab Singh, a member of legislative assembly, attended the event to show their support and empathy to the Tibetan people. Mrs Juchen Kunchok Chodon and Mr Tsultrim Tenzin, members of Tibetan Parliament-in-Exile and representatives of monasteries, schools and settlement took part in the function.

The settlement officer held a press conference in Palampur to apprise the media about this historic event and the prevailing critical situation in Tibet under the Chinese rule.