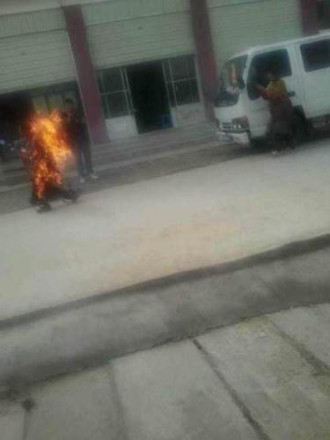 DHARAMSHALA: A Tibetan monk from Kirti Monastery in Ngaba county has set himself on fire to protest against the repressive policies of Chinese government in northeastern Tibet, according to sources in exile. Meanwhile, China’s official Xinhua news agency said a Tibetan monk from Shaderi monastery in Zekog county (Tib: Tsekhog) in Huangnan prefecture (Tib: Malho) has self-immolated.

Lobsang Palden of Kirti Monastery in his 20s set fire to his gasoline soaked body on the Martyrs Street in Ngaba county (incorporated into China’s Sichuan Province) around 11:30 am Sunday. He then walked few steps raising slogans and was immediately bundled away by police in a vehicle. His whereabouts and well-being remain unknown since then.

Local Tibetans shut down their shops and restaurants to mourn and express solidarity with the monk’s family members. The situation in the area remain tense with heavy deployment of police and security forces.

Today’s protest marks the sixth anniversary of the massacre of monks of Kirti monastery by Chinese forces on 16 March 2008, fews days after unprecedented protest against the Chinese broke out in Tibet’s capital Lhasa on 10 March. Hundreds of Tibetans were killed by Chinese security forces in the subsequent crackdown across Tibet.

Similar self-immolation protests by monks of Kirti monastery the same day took place in 2011, 2012 and 2013.

Meanwhile, China’s official Xinhua news agency today said a Tibetan monk has self-immolated. “The monk was from the Shaderi Monastery in Huangnan Tibetan autonomous prefecture in Qinghai province. The report said police were rushing to the site and gave no further details,” the Associated Press said quoting Xinhua’s report. ”A man at the Zekog county public security bureau confirmed the immolation and said it took place outside the monastery. He said he had no other information and refused to be identified,” AP reported.

The total number of self-immolation protests by Tibetans in protest against the Chinese government’s repressive policies has risen to 128. The self-immolators have called for the return of His Holiness the Dalai Lama to Tibet and freedom for Tibetans.

Despite repeated appeals by the Tibetan leadership in exile not to engage in such drastic actions, the self-immolations have continued.

A white paper released by the Tibetan leadership in Dharamshala last year explains the fundamental reasons behind the ongoing wave of self-immolations inside Tibet and the alarming escalation in the protests witnessed in the last few years.

The principle reasons listed in the 91-page report for Tibet’s fiery protests are political repression, Chinese communist leader’s views and policies on Tibet, and cultural assimilation, destruction of Tibetan Buddhism. Besides, social discrimination, strangling the Tibetan language, environment destruction, Tibetan Nomads and ending their way of life and economic marginalisation, population transfer and western China Development Programme are the other reasons given in the report. (Read and download White Paper)

The Tibetan Parliament-in-Exile has urged the Chinese government to end its repressive policies in Tibet and address the genuine grievances of Tibetans.

“We firmly reiterate our appeal to the Chinese government that it must end its hardline policies in Tibet and address the aspirations of Tibetans inside and outside Tibet for the return of His Holiness the Dalai Lama to Tibet and freedom and human rights for Tibetans, and immediately commence dialogue to resolve the issue of Tibet,” the Tibetan Parliament-in-Exile said in a resolution passed on Tuesday. (Tibetan Parliament in Exile passes Resolution of Solidarity)

The resolution urged the members of the UN Human Rights Council to convene an urgent session on the issue of Tibet and send fact-finding missions to assess the urgent situation inside Tibet.