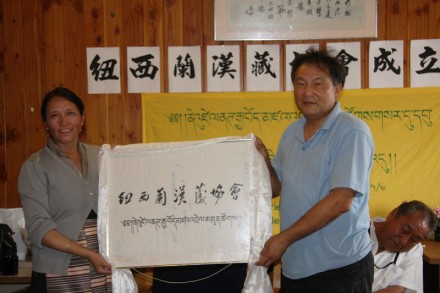 From left) Ms Dadon, the Chinese liaison officer at the Office of Tibet in Australia, at the inauguration of the
CANBERRA: A Chinese-Tibetan Friendship Association has been established in New Zealand to promote friendship and better understanding between the two communities towards resolving the issue of Tibet.
The friendship association, formed voluntarily by a group of educated Chinese and Tibetans living in Auckland, was launched at a function on 6 January. Around 30 people, consisting of members of the local Chinese and Tibetan communities, Tibet supporters, Chinese liaison officer of the Office of Tibet in Australia, editor of a Chinese newspaper in Auckland and journalists, attended the function.

Addressing the function, Ms Dadon, the Chinese liaison officer at the Office of Tibet in Canberra, said: “ The newly formed association would help to strengthen efforts to bring a mutually beneficial solution to the issue of Tibet through the Middle-Way policy, and to clear doubts and misunderstandings between the Chinese and Tibetan peoples.”

“The formation of this association can be considered as an important step towards helping the Chinese people to understand the reality of the issue of Tibet and the visions of His Holiness the Dalai Lama,” Ms Dadon added. 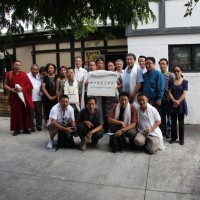 Members of the newly formed Chinese-Tibetan Friendship Association in Auckland,
She presented traditional Tibetan scarves (Khata) to the executive members of the Chinese-Tibetan Friendship Association as a gesture of appreciation for their initiative.
Mr Rinchen, president of the association, addressed the gathering on the association’s objectives and its future plan of action. “The Chinese government is making different deceitful schemes and propaganda to sow discord and obstacles between the Chinese and Tibetan peoples. We need to make efforts to clear our doubts and misunderstandings through the Middle-Way policy envisioned and endorsed by His Holiness the Dalai Lama and the Tibetan people respectively.”

Mr Rinchen said efforts would be made to bring together Tibetans and Chinese to commemorate important occasions such as His Holiness the Dalai Lama’s birthday celebration on 6 July, Tibetan National Uprising Day on 10 March, and the Chinese democracy movement of 6 June. There would be cultural exchange between the two communities during the Tibetan New Year to know each other better and deepen mutual trust, he added.

In his address, Mr Chen Weijian, the association’s vice-president and a long time Chinese supporter of Tibet, said: “The Chinese-Tibetan Friendship Association in New Zealand has been instituted in accordance to His Holiness the Dalai Lama’s advice on the need for such an association to foster friendship and trust between the two communities. The association would make efforts to facilitate better understanding amongst the Chinese people about the issue of Tibet and His Holiness the Dalai Lama’s visions.”
Similar friendship associations were established in Australia and Japan as part of the Tibetan people’s efforts to reach out to the Chinese people.