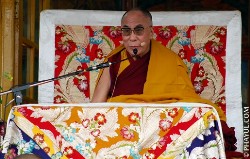 HIs Holiness the Dalai Lama delivers teaching on Jataka tales at Tsuglakhang courtyeard, March 19, 2011. Phayul photo/Norbu Wangyal
firm on his decision made clear in his statement of March 14, 2011.

The Tibetan leader also Saturday publicly appealed Tibetans both inside and outside of Tibet to accept his decision to give up his political leadership in his effort to push for a full-fledged democratic system of governance for the Tibetan polity.

The Dalai Lama, however, maintained that his decision did not mean to isolate himself completely from the Tibetan cause and reaffirmed his support for middle-way policy of seeking meaningful autonomy, saying he still sees it as the most pragmatic approach to resolve the issue of Tibet.

The public appeal came a day after Tibet’s parliament in exile refused to accept Dalai Lama’s proposal to formally legalize his decision by making necessary amendments in Charter of Tibetans in exile to pass on his political authority to an elected leadership.

Despite Dalai Lama’s demanding decision to devolve his political role, the Tibetan parliament on Friday passed a resolution urging Dalai Lama to reconsider his decision, saying Tibetans are satisfied with the kind of democracy thriving under his leadership.

“The rule by spiritual leaders or the rule by kings is an outdated concept,” the 75-year old Tibetan leader who has been calling for democratic reforms since the 1960s, told a huge gathering of hundreds and thousands of Tibetans at the courtyard of the main Tibetan Temple here.

“In reality I have been describing myself as a semi-retired person for the last ten years,” the Dalai Lama said, adding that a change was already implemented way back in 2001 when Tibetans for the first time went to polls to directly elect their prime minister or Kalon Tripa.

Describing democracy as the most popular form of government, the Tibetan leader said it was necessary to establish a sound system of governance while he remained able and healthy.

Refusing to accept requests by Tibetan people asking him to continue his political leadership, the Dalai Lama today reiterated that his decision was pragmatically aimed at benefiting Tibetans and their cause in the long run.

“We are already in 21st century, and sooner or later a change has to come. So we must prepare before it becomes too late,” the Dalai Lama said.

The Dalai Lama, however, explained that devolving political role did not mean dissolving the Institution of the Dalai Lama (Ganden Phodrang) altogether.

“The Ganden Phodrang as a spiritual entity will continue, but the institution’s political power will be relinquished,” the Dalai Lama said.

“If that happens, like the first, second, third and fourth Dalai Lamas I can concentrate more effectively on spiritual role,” the Dalai Lama said.

Among the audience were also a group of newly arrived Tibetans from Tibet. The Dalai Lama urged them to effectively spread and explain about his message inside Tibet.

His Holiness said there was no need for Tibetans in Tibet to worry or lose hope with his decision, insisting it will help Tibetan people in the long run.

Dalai Lama reiterated that his intention to devolve political authority was neither from a wish to shirk responsibility nor because he was disheartened, but to help Tibetan to better prepare themselves to face long-term challenges.

“I am a Tibetan, and more precisely I am Tibetan born in Amdo region of Tibet. So there is no way I can disassociate myself from the Tibetan cause. In future if an urgent need arises, I will always be ready to serve the cause,” the Dalai Lama said.

Hundreds and thousands of Tibetans and visiting tourists gathered at the Tibetan Temple (Tsuglagkhang) to take part in the Monlam (The Great Prayer) festival and to listen to the Dalai Lama’s teachings.