Dharamsala, March 20: Tibetan exiles in Dharamsala and elsewhere around the world on Sunday went to polls to elect a new prime minister and also the new members of their parliament in exile.

In Dharamsala, the hill town in north India that serves as the base for Tibet’s government in exile, hundreds and thousands of Tibetans, including monks and nuns, lined up in almost 10 polling stations set up in and around the town to elect a new prime minister who is set to head the Tibetan Government-in-Exile.

The elections have both political and emotional bearings on the Tibetan people after His Holiness the Dalai Lama, who is valued by Tibetans as their undisputed spiritual and political leader, announced a week ago his decision to formally devolve his political power to an elected leadership.

Addressing a huge gathering of Tibetans here yesterday, the Dalai Lama publicly reiterated his determination to give up the political role in the Tibetan Government-in- 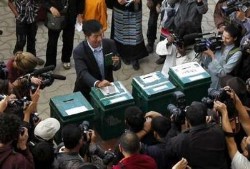 Tibetan government-in-exile prime ministerial candidate Lobsang Sangay shows his identity document as he casts his vote during elections for a new prime minister in the northern Indian town of McLeodganj March 20, 2011. Three secular candidates are battling to fill a vacuum created by the Dalai Lama's move to relinquish political power after more than five decades as head of the Tibetan government-in-exile. (REUTERS/Fayaz Kabli)
Exile, and urged the Tibetans to wholeheartedly accept his decision.

The Tibetan leader’s office also dispatched a letter to the Tibetan Parliament’s ongoing session yesterday firmly rejecting a plea by the latter asking him to continue with his role as both the spiritual and temporal leader of the Tibetan people.

In McLeod Ganj, the upper town in Dharamsala where most Tibetans reside, an election officer today said the participation by Tibetans in today’s election was overwhelming and estimated that the voter turn could be much more higher than that of the preliminary rounds held in October last year.

From the preliminary rounds, Dr Lobsang Sangay, 43, and Tenzin Namgyal Tethong, 62, have emerged as the favorites for the highest elected leadership post in Tibet’s government in exile. The third candidate in the fray is Kasur Tashi Wangdi, 64.

Thanks to his active campaigning and his growing popularity among Tibetans, especially among the youth, Dr Lobsang Sangay won the preliminary rounds by a margin of more than 10,000 votes ahead of the next closest contestant out of a very small total voting population.

Earlier this morning Sangay turned up at the polling station here at the main Tibetan Temple (Tsuglag Khang) to cast his vote. Speaking to media after casting his ballot, Sangay said regardless of whether he wins the elections or not, he, like all other Tibetans would still consider Dalai Lama his leader.

A newly arrived Tibetan refugee, who is casting a vote “freely for the first time” in his life, said he felt extremely happy and proud to elect Tibetan leaders in a spirit of democracy and freedom.

“In Tibet, Chinese government claim Tibetans have democratic rights, but in reality is no freedom of choice and also there is no space to air one’s political views,” he said on condition of anonymity, expressing fear of reprisals on his family members who are still living inside Tibet.

Although he understands Dalai Lama’s decision to relinquish his political role for the benefit of Tibetan people in the long run, he, however, fears it will take a long time before Tibetans in Tibet will accept it.

Sunday’s elections will also decide the new lawmakers who will form a 44-member 15th Tibetan Parliament-in-Exile.

Out of the 79,449 registered voters, little over 47,000 (approximately 61%) voted in the preliminary polls conducted on October 3.

Following the preliminary elections, the Election Commission of the Central Tibetan Administration further extended the voter registration date to allow more eligible voters to take part in the final rounds of elections.

As result, the registered voter’s number increased to more than 82,000 for the 2011 Tibetan General Elections.

Estimates show that some 90,000 of the approximately 150,000 Tibetan exiles worldwide are above the age of 18 and are eligible to vote.

Mr Choesang also said the final results of the elections would be declared on April 27, 2011.