The Flame of Truth Torch was flown down to Hobart on 19th September with Tenzin Lobsang, Vice President, Melbourne Tibetan Community. The Tasmanian Tibetan Community welcomed the Torch from Hobart Airport with the offering of traditional Tibetan scarves. The formal signature  campaign was launched in the afternoon by Mr.Bob Brown, the former Greens Senator and a long time supporter of Tibet, in whose presence, the formal handing over of the torch took place between Tenzin Lobsang and Tasmanian Community President 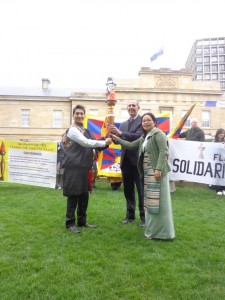 The program began with an introductory speech by Dr. Sonam Thakchoe, highlighting the aims and objectives of the signature campaign and the symbolism of the torch. The chief guest, Mr. Bob Brown, highlighted the flagrant violations of human rights in Tibet by the Chinese Government and suffocation of the Tibetan people, who are forced to helplessly express themselves through self-immolations. Mr. Brown also affirmed  his dedication and commitment to continue his support to the Tibetan cause even in his retired years. Labour Senator Lisa  Singh, due to her work commitments, could not join us, but her massage was read by Berry Dunston, a long time supporter of Tibet and also the Tasmanian branch secretary of the Australian Tibet Council. Berry also shared her own perspectives on the grim political situations unfolding in Tibet.

On Saturday, 22nd September, Tibetans and the Tibet supporters pitched a stall at the famous Salamanca Market from 9.00 am to 2.30 pm and gathered hundreds of signatures from the public. A short walk with the torch was organised around the Hobart city street on the same day.  In the evening, we had a fund-raiser video screening, where we had shown four short video footages. The first video briefly introduces the audience to the aims and the objectives behind the Flame of Truth Campaign as outlined in the interview with Tibetan Parliamentarian Karma Yeshi. The second and third videos depict the profiles of some of self-immolators and their primary intentions behind the self‐immolation bid.

The final piece we screened was about the Middle Way Policy. All the proceeds raised during this event will be sent to support the organizer of  the Flame of Truth Campaign.

On 23rd September, the Tibetan community was invited with the Flame of Truth Torch to Farm Gate Market by the market coordinator Madi Peattie and  Lynn McCambridge.The signature campaign at the market was successful.    On 24th of September, Tasmanian Tibetan Community President Tenzin Sangmo flew to Brisbane to hand over the torch to Brisbane Tibetan Community.  She was received at the airport by the members of the Tibetans community and ATC President.     In conclusion, Tasmanian Chapter of the Flame of Truth Relay was a great success. In spite of the fact that there are only seven Tibetan  families in Tasmania, the signature campaign activities were very well received and supported by the public. It also attracted a good deal of media interests and coverage. The story received a brief coverage on the local Southern Cross TV Channel, Mercury newspaper .  The events were also broadcast on ABC local radio.