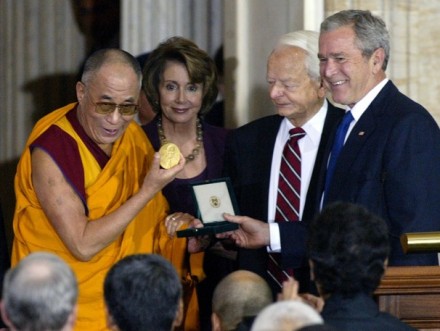 After the Nobel Peace Prize win in 1989, the Tibetan struggle for freedom and justice got another major shot in the arm on this day in 2007 with the conferment of the Congressional Gold Medal, the highest civilian award of the US, on His Holiness the 14th Dalai Lama.

Ms Nancy Pelosi, the then speaker of the US House Representatives and an wavering friend of Tibet, addressing the award ceremony in the Capitol Rotunda, fondly reminisced about how a special relationship between the United States and the Dalai Lama began in Tibet.

“I thank the co-sponsors of the legislation for making today possible. With this Gold Medal, we affirm the special relationship between the United States and the Dalai Lama. It is a relationship that began with a gold watch. As a boy, the Dalai Lama enjoyed science and mechanics. Knowing this, President Franklin Roosevelt gave the very young Dalai Lama a watch showing the phases of the moon and the days of the week. The Dalai Lama described the gold watch as ‘magnificent’ and even took it with him when he fled Tibet in 1959. His Holiness still uses the watch today and his teaching about the connection between science and religion is an inspiring part of his message,” Ms Pelosi recounted.

“To the international community, he is the spiritual leader of the Tibetan people. To millions of believers and admirers, he is a source of wisdom and compassion. To young people, His Holiness is a positive example of how to make the world a better place,” she said.

Ms Pelosi further said: “When the Dalai Lama was awarded the Nobel Peace Prize in 1989, the Nobel Committee affirmed its ?unstinting support for his work for peace, and for the unarmed masses on the march in many lands for liberty, peace and human dignity.? And in doing so, the Nobel Committee honored the Tibetans who march across the Himalayas, and the many others who cannot.

“Today, with this Congressional Gold Medal, we honor the Tibetan people again and His Holiness the Dalai Lama for his ?many enduring and outstanding contributions to peace, nonviolence, human rights and religious understanding. Your Holiness: you bring luster to this award, and a challenge to the conscience of the world,” she added.

She also remembered the historic meeting between members of Congress with His Holiness the Dalai Lama in 1987. “ It was then that His Holiness described a ‘Middle Way Approach’ that seeks real autonomy for Tibetans within the framework of the People’s Republic of China. The Dalai Lama has expressed a willingness to visit China to engage directly with high level officials. It is my sincere hope that Beijing will take advantage of this opportunity and extend an invitation to His Holiness for substantive discussions,” she said.

Accepting the award, His Holiness the Dalai Lama said the recognition will bring tremendous joy and encouragement to the Tibetan people, for whom I have a special responsibility. I believe that this award also sends a powerful message to those many individuals who are dedicated to promoting peace, understanding and harmony, he said.

Speaking at the award ceremony, President George W Bush said: “Over the years, Congress has conferred the Gold Medal on many great figures in history — usually at a time when their struggles were over and won. Today Congress has chosen to do something different. It has conferred this honor on a figure whose work continues — and whose outcome remains uncertain. In so doing, America raises its voice in the call for religious liberty and basic human rights. These values forged our Republic. They sustained us through many trials. And they draw us by conviction and conscience to the people of Tibet and the man we honor today.

“Throughout our history, we have stood proudly with those who offer a message of hope and freedom to the world’s downtrodden and oppressed. This is why all of us are drawn to a noble and spiritual leader who lives a world away. Today we honor him as a universal symbol of peace and tolerance, a shepherd for the faithful, and the keeper of the flame for his people,” President Bush said.

The day led to celebrations by jubilant Tibetans living both in and outside Tibet.