PERTH: His Holiness addressed a sell-out crowd of 14500 people at the Burswood Dome in West Australian capital Perth this morning. He spoke on “Spirituality in the Modern World” at his last “public conversation” as part of the 2011 Australian tour. 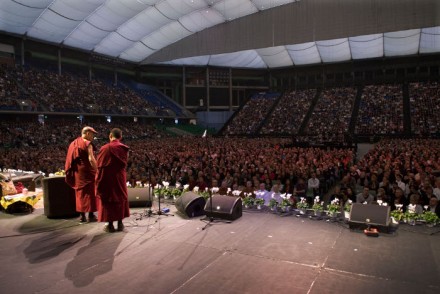 His Holiness the Dalai Lama giving a public talk on "Spirituality in the Modern World" in Perth, Australia.
“The world has made great material developments in 20th century and in the last decade of 21st century. What is now needed is advancement in spirituality,” said His Holiness, adding, “it should be taught as a subject from kindergarten to university.” He noted spirituality however is not just based on religious faith – a view widely held in the west. By arguing this narrow definition excludes non-believers, who make a substantial population in the world, he defined spirituality as essentially being moral ethics or inner values such as compassion.

His Holiness further added, “Every human being has the ability to show compassion through our common experience of the love we get from our mother. It is by use of human intelligence that we understand the long-term benefit of this inner value.”

In what has become an increasingly popular Australian protocol, a local Aboriginal man gave a Welcome to Country performance to His Holiness at the opening of his public talk. His Holiness spoke for the treatment of indigenous people in Australia and said they should also make the effort to seek out a modern education whilst preserving their culture.

At the closing of the public talk, Dalai Lama in Australia Ltd, the organiser of the visit, reported to His Holiness that 65,000 people have attended his events across four cities in the last 11 days. Another 100,000 watched live webcast of the visit. A photo exhibition depicting His Holiness’ life journey that began in the lead up to his visit will continue for the next few weeks. In the first of its kind, His Holiness will appear in top-rating Australian reality TV show Master Chef. It will be on air in the coming weeks.

At lunch, His Holiness met with a group of business leaders in West Australia, the state with the strongest trade ties with China. He also took an opportunity to meet with the local Tibetan, Mongolian and Bhutanese communities.
The day concluded with the “Songs for the Dalai Lama” concert. Some of the big names in the music industry have given their time to celebrate His Holiness’ journey and support Tibetan charities. They include Tim Rogers, Tex Perkins, Baby Animals, Katie Noonan’s Elixir Trio, Lior with String Quartet, Adalita, Old Man River, Luka Bloom, Lyrics Born and The Nobel Funk Off. Tibetan musician Tenzin Choegyal and the Gyuto Monks of Tibet also performed during the 6-hour concert. Luka Bloom, the Irish folk singer who has been travelling on His Holiness tour, sang his song “As I wave goodbye” for the last time with a group of musicians.

His Holiness made a brief appearance at the concert. He commended the artists for their work and encouraged them to spread the message of peace and compassion through their music.