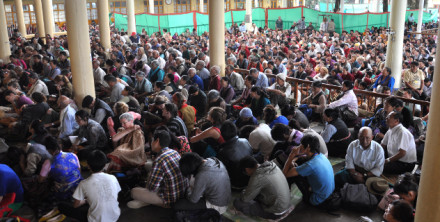 DHARAMSHALA: His Holiness the Dalai Lama has begun a 4-day teaching on Shantideva’s A Bodhisattva Way of Life (TIB: Choedjug) at the main Tibetan temple, Mcleod Ganj near Dharamshala today.

The teaching is being held at the request of Nalanda Shikhsha comprised a group of 16 Sangha organisations across India.

In his introductory address, His Holiness the Dalai Lama said, “even though the teacher today is a Tibetan, the place and the source of this rich religion is India. And I feel glad to be able to repay these ancient traditions back to the well-educated new generations of India.”

The teaching began with a recitation of Heart Sutra (TIB: Sherab Nyingpo) in Sanskrit led by a female Indian devotee.

Over seven thousand people including local Tibetans, 1,900 foreigners and about 14 Chinese from Mainland China are attending the teaching. The teaching will be held till 4 June 2013.