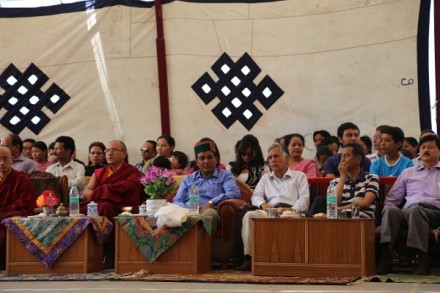 SHIMLA: “Dalai Lama: A Talkathon scroll” a book written by Prof. Som Ranchan was launched by  Shri Jagat Singh Negi, deputy speaker of Himachal Vidhan Sabha at a function held to mark Buddha Purnima on 25 May at Shimla. Gyabra Tri Sab rinpoche was the guest of Honour during the function.

The book is a collection of proses and poems derived from His Holiness the Dalai Lama’s life narratives, ideas from Buddhist philosophy and his leadership in the Tibetan cause. The author Som Ranchan is a retired professor from Himachal Pradesh University who has more than 70 books to his name.

The chief guest, Shri Jagat Singh Negi in his speech said that the Buddhist teaching of truth and non-violence is very important in one’s life. He thanked the Indo-Tibetan Friendship society for organising the function and urged them to continue their good work.