Dharamshala: Bhusang la, who spent 18 years in Chinese prison for defending his country from aggression and invasion by the forces of the People’s Republic of China in early 1960’s, passed away after prolonged illness in Dharamsala on 25 March 2010. He was 80.

In its condolence message, the Department of Security of the Central Tibetan Administration said, “Since his childhood Bhusang la has never wavered for a single day from his determination and commitment to work for the cause of Tibet and the people of Tibet. We deeply commend his service and pray for a good rebirth.” 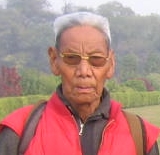 He was born to Lhawang Norbu and Tsering Yudon in Nyemo district in Tibet’s central province of U-Tsang in 1930. In 1942, at the age of twelve, he joined the Tibetan army and at the same time studied Tibetan medicine at the Men-Tsee Khang for seven years. From 1949 he served as physician for the police department.

During the crisis of 1959 he fought the Chinese first in Lhasa, later in Samye in Lhokha, Tsethang, Chideshol and Lhuntse and in due course moving to Tawang, Assam and Gangtok.

In March 1960 he went to the United States for secret service training. After completing the training he was part of the mission that was dropped into Markham district in eastern Tibet. Overwhelmed by Chinese force and fearing imminent capture on 15 April 1961 during an ambush he consumed poison to escape arrest. Unfortunately he was arrested and the poison caused permanent skin disease. He suffered immense torture and misery during his 18-year-long imprisonment.

He was released from prison in 1978 and in 1980 he came to India, had an audience with His Holiness the Dalai Lama and decided to reside permanently in India. He served in the Department of Security of the Central Tibetan Administration from 1982 until his retirement in 2003. Throughout his illness he received complete and full assistance and from the Office of His Holiness the Dalai Lama and the Administration.