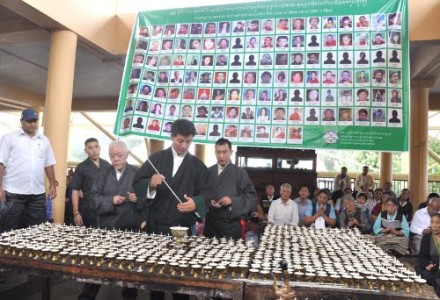 “We have organised a special prayer service today to express solidarity with all those Tibetans who have self-immolated for the cause of Tibet, and their family members,” Sikyong Dr Lobsang Sangay said. The prayer service was presided over by His Eminence the 17th Gyalwang Karmapa Ogyen Trinley Dorje.

Sikyong said the successful democratic transition His Holiness the Dalai Lama’s historic decision to devolve political authority to a democratically-elected leader has send a clear message to the Chinese government that Tibetans in exile will keep alive the Tibetan movement.

It has strengthened the hopes of Tibetans inside Tibet that their brethren in exile shoulder the responsibility in line with His Holiness the Dalai Lama’s vision and invigorated their courage and determination, he said.

The collective effort of His Holiness the Dalai Lama, the people and civil servants of the Central Tibetan Administration has deepened the international community’s conviction in our commitment to democracy, he added.

Sikyong said Tibetans in and outside has forged unity and made a concerted effort to ensure a smooth transition after His Holiness the Dalai Lama’s historic decision to devolve political authority to a democratically-elected leader.

The Kashag has proceeded with a three-phase approach of consolidation, action and dialogue since assuming office in August 2011, Sikyong said, adding that the first two phases have been completed.

Sikyong said “we have been able to consolidate a smooth democratic transition with the support of  Indian and international Tibet support groups by hosting their major conferences in Dharamsala.”

“The action phase witnessed major solidarity events in several cities including New York, New Delhi, Brussels, Tokyo, Sydney and others. These solidarity events were complemented by media awareness and efforts to garner support for Tibet in Congress and parliaments across the world. Working with friends and supporters of Tibet, we were able to get resolutions and motions passed in parliaments in the European Union (EU), France, Italy, the United States and others,” he said.

Sikyong said the CTA will now direct its efforts on the dialogue phase and pledged to make continued efforts to resume contact with the Chinese government and take initiatives to educate the international community, including Tibetans, on the Middle Way Approach.

He said the international community strongly supports the Middle-Way approach as most viable and pragmatic solution to address the problem of Tibet. “President Barack Obama in 2011 applauded His Holiness the Dalai Lama’s commitment to non-violence and dialogue with China and his pursuit of the Middle Way Approach, and encouraged direct dialogue to resolve long-standing differences and that a dialogue that produces results would be positive for China and Tibetans,” Sikyong said.

Sikyong said the task force on negotiations would be enlarged and will hold their 26th meeting this September.

Sikyong said the situation in Tibet remains critical as Tibetans continue to set themselves on fire to protest against China’s repressive rule.

Sikyong reiterated that Tibetans are driven to set themselves on fire in protest by the Chinese government’s policies of political repression, cultural assimilation, social discrimination, economic marginalisation and environmental destruction over the last 60 years of its invasion. “The blame and solution lies squarely with the Chinese government,” he said.

“Through various media, the Kashag has consistently appealed and categorically discouraged Tibetans in Tibet from self-immolating as a form of protest. Life is precious and as human beings we do not want anyone to die in such a manner. As Buddhists, we pray for the soul of the deceased. As Tibetans, it is our sacred duty to support the aspirations of Tibetans in Tibet: the return of His Holiness the great Fourteenth Dalai Lama to Tibet, freedom for the Tibetan people, and unity among Tibetans,” he said.

Since 2009 over 120 Tibetans, including young monks, nuns, nomads, farmers and students, have self-immolated to protest against the Chinese government’s continued occupation and repression of Tibet. The self-immolators have called for the return of His Holiness the Dalai Lama to Tibet and freedom for Tibetans. (Fact sheet on self-immolations in Tibet)

Sikyong praised the campaigns initiated by Tibetans inside Tibet to foster and strengthen unity among themselves. “Unity is of paramount importance and we appealed to our brethren to make continued effort towards this end,” he said.

Sikyong said the international support for the issue of Tibet is a result of His Holiness the Dalai Lama’s vision and achievements and, truth and moral standing of the Tibetan people. “The international community recognises Tibetans as a people with moral character, honest and truthful. So we urge Tibetans both in and outside Tibet to maintain this recognition,” he said.

He also urged Tibetans to shun alcohol and drug addiction and gambling.