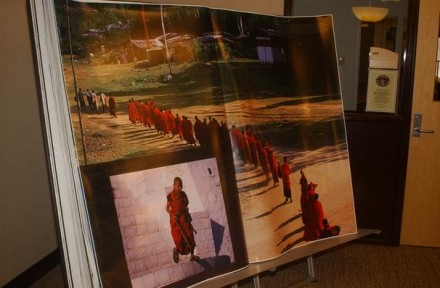 “The Bhutan: A Visual Odyssey Across the Last Himalayan Kingdom” is part of an exhibit in honour of the upcoming visit by His Holiness the Dalai Lama. The Bhutan measures 5 feet by 7 feet when opened and weighs 133 pounds, The Oxford Press reported.

His Holiness the Dalai Lama will make a presentation at Miami University on 21 October in Millett Hall titled, “Ethics in a Modern World.”

“Buddhism: An Exhibit in Honor of the Dalai Lama’s Visit” features books written by His Holiness the Dalai Lama, the Time Magazine cover featuring him, the Life cover on his flight from Tibet to India and more.

Just a few of His Holiness the Dalai Lama’s 72 publications are on display, but the library does have all on hand. Many of his books focus on happiness, Stuckey said.

“It isn’t necessarily about Buddhism, but it’s about living in harmony. That’s why he’s a man of peace,” Stuckey said.

Miami established a relationship with the Institute of Buddhist Dialectics in Dharamsala, India, during summer workshops in Tibet led by two faculty in anthropology from 2004-2008. His Holiness is a patron of this institute, one of the premier institutions for study of Buddhist thought and philosophy.

After university faculty visited Dharamsala and signed an affiliation agreement, Miami began offering a Tibetan studies semester programme last fall. It will be offered annually in the fall.